Buy the album here or on iTunes.  You can download detailed composition notes and composer biographies here.


“two + two” is an important recording.  The performances project a unanimity of purpose and spirit while demonstrating an artistry that puts TorQ squarely on par with the best percussion ensembles in the world.  [...] Sonically, I believe this to be a landmark recording.  [...]  The entire effort is a tour de force.  TorQ and (producer) Ray Dillard have serendipitously teamed up to create a “must have” percussion ensemble recording.”

"[TorQ’s] sophomore recording effort "two + two" is a remarkable collection of engaging pieces, fine performances and above all, balance.  [...]  Top to bottom the performances are impeccable, both in virtuosity and sensitivity.   Some percussive collections have a tendency to be overly intellectual, but this is definitely a CD that works both when you listen to it with your eyes closed and when you listen on a drive.  [...] Bringing energy and drive to  [Cage’s Third Construction], the instrument choice and execution make this something special.   All in all a wonderful effort from TorQ, and I’m very eager to see what lies ahead for them." 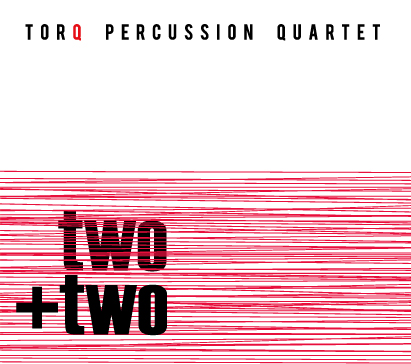 TorQ is grateful for support from the following organizations: